High Tea at the Empress

I am seated at an excellent table in the Fairmont Empress Hotel’s Tea Lobby, and I’m looking across Government Street toward the Inner Harbor of Victoria, which has to be the most charming city in all of British Columbia. 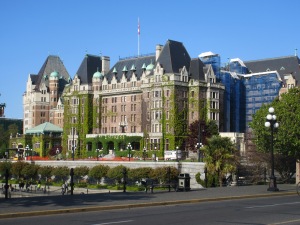 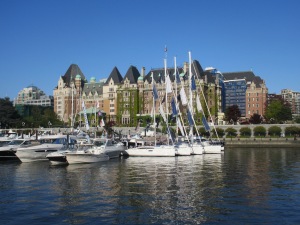 From here, I can see the yachts moored along the boardwalk. There’s a boat show today, and the weather is simply perfect, so throngs of people are crowding along the pier to get a glimpse of the latest marine gear. Occasionally, a float plane lands on the glistening water and taxis up to the dock to disembark its passengers. From my window seat, I can also see the iconic Parliament building in all its neo-baroque opulence. It’s good to be the king! 🙂

The hotel itself is a masterpiece of understated Edwardian luxury and is a landmark building in its own right. It is a true statement to say that Victoria would be unrecognizable without it. Yet it barely escaped the wrecking ball in favor of a modern high rise in 1965. Fortunately, cooler and nobler heads prevailed, and the storied inn for such luminaries as Shirley Temple, Edward VI, Queen Elizabeth, and Rudyard Kipling was preserved. Thanks to God and cultured Canadians. 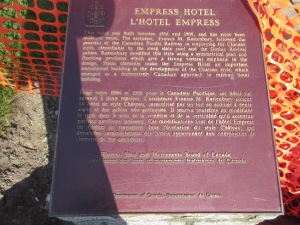 Inside, I am treated to a level of service commensurate with the overall ambience of the building. The Tea Lobby is a huge, high ceilinged space, yet it feels intimate, in part due to the hushed conversations of the tables around me, but also due to the subdued colors and artwork which cover the walls. Partitions break the space up into manageable segments, and, in the background, you can hear a musician playing some old favorites on the piano. The overall effect is of a private gentleman’s club. 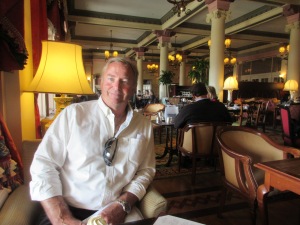 My Chinese waiter is very efficient and quick to offer extra services, like snapping a picture for my guest and I. We order the standard Afternoon Tea Service ($63CAD pp), and out he comes with the English China to pour us both a cup. The blend is Assam, Kenyan black, Kenyan green, Dimbula from Sri Lanka and Keemun. Here I confess I have no clue about tea, but my guest does, and she confirms that it is sublime.

Your meal starts with strawberries and cream, followed by a 3-tiered server that is loaded for a big appetite: honey ham, egg salad, salmon, croissants, buttery scones with preserves, spiced chicken. By the time you reach the top tier with the desserts, you really need a breather, but the petit fours and chocolates are too much to resist. Come hungry to tea.

By the way, this is one of those places where you get way more silverware than you know what to do with, so you start from the outside in hoping that there’s some rhyme or reason to it. It turns out, that’s actually a pretty good strategy, but it also turns out that eating here, at a place that has been visited frequently by royalty, isn’t as pretentious as I thought it would be, and no one is really paying attention to my indecision.

This is an experience as much as a meal, and I highly recommend you enjoy it if you’re ever in the city. They even include a gift box of the Empress Blend at the end of your meal. There’s a reason it’s ranked as one of the top “things to do” on Trip Advisor. It’ll make you feel like the Great Gatsby, if only for a couple of hours. 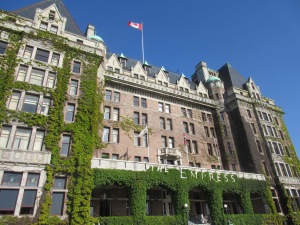 If you go, I make the following recommendations:

Make reservations-The day I came it would have been possible to just walk in, but I wouldn’t have gotten a window seat. Why risk the disappointment?

Allow plenty of time-This is a leisurely experience. Give yourself the luxury of time to soak up the atmosphere-and digest all that food. Minimum 1 1/2 hours.

Dress appropriately-This isn’t the place for your favorite flip flops and Hawaiian shirt. Slacks for men, preferably with a sport coat. I didn’t have one, and they didn’t throw me out, but it would’ve been better if I did. For women, longish dress and heels.

No cell phones! Have you ever been in a movie where that one guy forgot to turn his off? Don’t be that guy. Remember, it’s an experience.

Look at the rest of the place while you’re there-especially the Bengal Lounge. It’s like something out of the Kenyan Safari Club. Very masculine. Very British.

This entry was posted in Travel. Bookmark the permalink.

7 Responses to High Tea at the Empress