The trip up to Jekyll Island is pretty uneventful.  The F250 easily handles the 5’er it’s hauling, and even though there is significant wind shear courtesy of a named storm, it’s as solid as a rock on the road while returning about 10 MPG in the process.  As a memo, my old truck was an F150 gas motor and it got 8 MPG under similar conditions.

The only drawback I can see right now is that I need to search for the “right” gas station, which is kind of like finding the right girl.  Most of them do have what you want, but easy access without drama is a big concern.

I’m reminded of the time I had to actually back out of a pump station because my trailer wouldn’t clear the awning.  So it certainly isn’t a given that just any station will do.  Now I’ve trained myself to look for the truck stops because they have parking lots like the deck of an aircraft carrier to turn around in.  Trouble is, finding the right station cost me time and fuel on the way to Georgia.  I had to pull in to four different exits to find the perfect place.  I keep telling myself I’ll get better at this, but that’s what I said about finding the right girl, and that took me 40 years.

I set up at the Jekyll Island Campground, which is nice enough.  They don’t have a pool or level parking, but they do have an abundance of trees, and I’m reasonably removed from my neighbors.  This time the set up is only about 30 minutes.  I’m not exactly ready for a NASCAR pit crew, but still I’m much better than my usual level of unsafe incompetence.

Of course, the hot water still doesn’t work, so my wife has to use the facility restrooms, which last sparkled when they were new in 1972.  She tells me they’re similar to what she encountered at summer camp in the Soviet Union during the Cold War, and I remind her of whose idea this all was, which I’ve always thought of as a great way to communicate with your spouse.  Of course, I’m on my third marriage now.  Your mileage may vary.

Nonetheless, I’m impressed by the peace, quiet, and nature that abound here.  All I can hear in the morning are the birds chirping, which is a nice contrast to the angry incessant roar of the Interstate at our first stop. 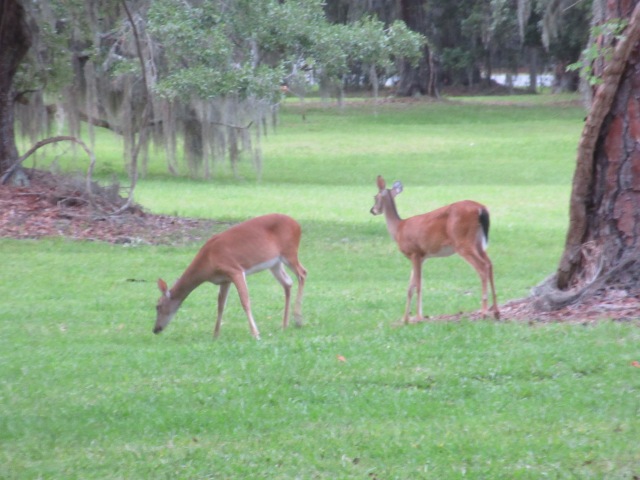 I’ll tell you about Jekyll Island itself a bit later, but for those only interested in the dollars and cents, here’s RV travel the damage so far:

Now, you may ask, how did you spend so much money on food?  Are you a blimp?  Well, yes, I am, thanks for asking, but also I am not willing to say that I traveled through an entire region of the country without sampling the cuisine.  To deprive myself of Georgia pork BBQ or shrimp and country grits because I have a kitchen in the RV would be like going to Paris and eating at McDonald’s.  Not going to happen.

So yes, throughout this trip, I’ll occasionally dine out just as I would when traveling by car.  Sometimes I’ll have a drink at a bar, especially when it’s in an intimate setting that just oozes old money ambience like the Bar at the Jekyll Island Club resorts.  It’s worth it to have the experience.  After all, if you don’t think food and drink are an integral part of traveling, you’re reading the wrong blog.

So throughout this series, I’ll splurge occasionally and sure, it may not seem fair, since I could have saved the money and eaten in the RV vs. the absolute certainty that, had I traveled by car and “hotel hopped”, I would have dined out nearly every time, and it would have cost more, relatively speaking.  All I can say is, if that is the mentality at work, I could have just saved a bundle by staying home!  No, the idea is to experience the culture, and that includes food and drink.  So the RV has to compete with the car travel on that basis as well, even though there will be savings on most nights because we will eat in the RV.

OK, glad we got that settled.  Here’s the estimated travel cost by car:

Now, a word about expenses while traveling by car:

All that said, car travel, to my surprise, seems quite bit more expensive so far.  But of course, the trip is new, and I’ve already pointed out many of the pitfalls of trailer travel.

So that’s it for the RV notes.  Read on for a quick overview of Jekyll Island.

First, it’s a beautiful place, and since it’s only 8 miles long, everything is easy to see.  Spanish moss drapes southern live oaks that frame the mansions of the Robber Barons of the Gilded Age.   High dunes hide gorgeous beaches along the Atlantic side, while the Intracoastal Waterway provides a way to dock your boat or take a quick fishing trip on the landward side of the island.  The state of Georgia has owned the island since WWII, so all the grounds look manicured like a park.

It has an interesting past.  The historic district is infamous because the idea for the Federal Reserve system was hatched here.   That’s why it’s known as the lair of “The Creature From Jekyll Island”.  Back in the day, it was said that 1/6 of the world’s wealth was represented at the dining table in the Jekyll Island Club…and that was without Andrew Carnegie present, who owned Cumberland Island to the south!  Membership in the club was like a who’s who of America’s richest: Rockefeller, Goodyear, Vanderbilt, Pulitzer…they all had winter homes here, and many of their “cottages” are still standing.

But today, it’s a laid back vacation destination that caters to just about anybody’s interests: beaches, golfing, fishing, etc.

Tomorrow, I head for Boone, NC!  Hope to see you then.