God, Gaudi, and the Sagrada Familia

I am standing inside the nave of the Sagrada Famila, and I am in awe. This is the most beautiful building I have ever seen…the most heavenly of all of man’s creations. Yet, my camera cannot adequately capture the sheer size and scope of this project any better than I can in words. Suffice it to say that, when it is finally completed on the centennial of its architect’s death in 2026, it will be, by far, the tallest church on earth, and will be the longest-lasting construction project of the 19th, 20, and 21st centuries. Yet even now, with giant cranes looming overhead like so many steel skeletons, it surprises, delights, and leaves you struck dumb with its audacity of design and supernatural elegance. The Sagrada familia is at once a place of worship, a brilliant landmark, and a testament to the genius of one man-Antoni Guadi.

It is safe to say that without Gaudi, Barcelona would be just another industrial city in western Europe, rather than an international tourist destination. The Catalan people are blessed with his life’s work, whether it be in the fine detail of his iron street posts or the magnificent grandeur of the Sagrada Familia; it is his organic and modernist architecture that, more than anything else, has come to symbolize a city and its people. And it is in his unique genius that I find an archetype that crosses all cultural boundaries. 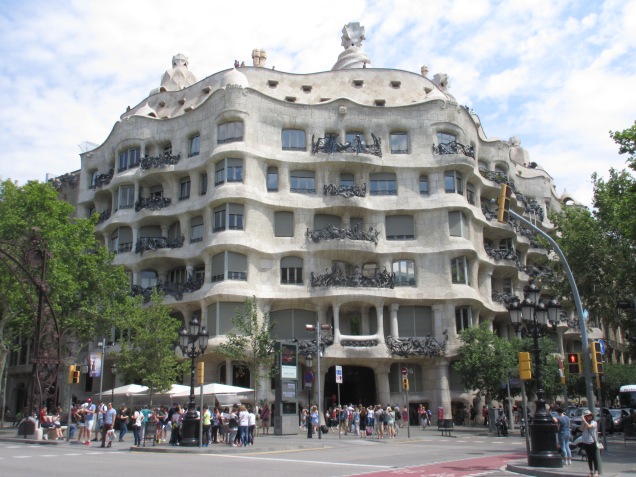 But what is interesting to me about Gaudi is not the actual fact of his architectural achievements, whether they be Parc Guell (Europe’s first planned bourgeois community), La Pedrera (a wavy apartment building), or the Sagrada Familia, but what kind of man he was, because the major influences on his life undoubtedly helped to shape his intellect and fire his imagination in a way that his enormous talents alone would never have managed on their own accord. And, as it is inarguable that he was, first and foremost, a Christian, I would argue that Gaudi’s inspiration came directly from God.

Indeed, Gaudi himself would not argue with that. He once said his work was to “the glory of God”. It has been reported that Pope Francis wants to make him a saint, such was the power of his faith.

I do not know who should be a saint, but I know that what a man leaves behind when he dies is indicative of the kind of person he was. What you will find at his home in Parc Guell today is a small devotional room with an altar before which he was said to have prayed every day next to a modest bedroom whose chief decoration is a large crucifix.

I also know that Christians are supposed to be humble. Gaudi, when he was a young agnostic man, was rather a dandy, but later he began wearing clothes so worn that when he was struck by a tram in a fatal accident, he was initially taken to a hospital for penniless beggars, because the first responders assumed he was a bum.  And when he awoke in the clinic and was told he should be moved to a better facility, he refused, saying that “My place is here, among the poor.”

And he was generous to the church. Gaudi gave his last penny to the construction of his beloved project, a project he knew he would never see finished, the monumental Sagrada Familia.  He once joked about it, saying, “My client is not in a hurry”, referring, of course, to God.

So, a saint? I am not qualified to say. But certainly, a devout Christian. Yet, he was a man who was celebrated as a genius in his own time, a man who could have indulged himself in every decadence available in the bars and bistros of the seedier Barcelona barrios, as his contemporary Picasso once did; but instead, he lived a life of work and quiet solitude away from the societal limelight that he shunned. Anyone looking at his life and work should be inspired by his example of humility, intelligence, industry, devotion, and charity. I am myself inspired by it.

Near the end of his life, Gaudi had this to say:

“My good friends are dead; I have no family and no clients, no fortune nor anything. Now I can dedicate myself entirely to the Church.”

Of such men was our civilization once made. Of such faith was our culture once anchored. But we have severed that tie now, convinced it is no longer necessary, and have filled the vacuum of our empty souls with clever lies sold by telegenic charlatans in the service of mammon. If Gaudi was a creature of his own Christian civilization, what creatures will our new experiment produce? That is an unpleasant question, because what it has produced so far has been a cult of celebrity based upon nothing more than hubris, narcissism, and self-promotion disguising a soft totalitarianism of utter conformity underneath. Could such a culture, based, as it is, on nothing more than the thin hope or promise of temporal success, ever hope to produce another Gaudi?…or Michelangelo?…or Copernicus? And, even if it could, would we have the sense (or innocence) to appreciate them? Would we even be allowed to? It seems to me that these are some of the fundamental questions of our age.

2 Responses to God, Gaudi, and the Sagrada Familia